The aim of the Context Phase, which concluded in March 2015, was to frame the broad context for the inquiry and set out the background to the banking crisis and to prepare the ground for Nexus Phase. The Context Phase consisted of technical briefings for the Committee in areas such as bank lending and liquidity management, mortgage exposures, and the nature, cost and scope of the guarantee decision. During the Context Phase, there were 31 public hearings with relevant witnesses for the purpose of information-gathering to inform the Nexus Phase of the Inquiry.

The Nexus Phase focused on three broad elements — Banking Systems & Practices; Regulatory and Supervisory Systems & Practices; and Crisis management systems and policy responses — and how these three elements interacted with each other. The aim of the Nexus Phase, which started in April 2015 and concluded in September 2015, was to question key witnesses on the main issues and any information gaps identified in the Context Phase and the investigation process. The Committee presented its final report in January 2016. 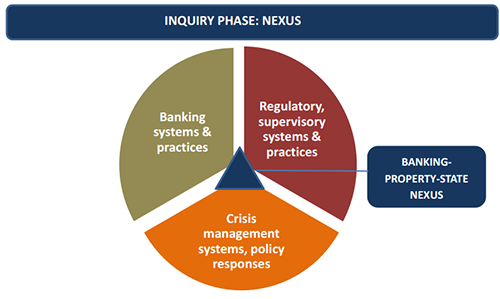